The CK350-F is a fever screening system suitable to be used in areas where there are large groups of people such as airports, seaports and public places such as shopping centres. It is a fixed camera that has a powerful 384×288 IR detector which delivers 110,592 pixels to the end-user’s screen. The thermal video/images have a temperature measurement range of 0°C ~ +60°C and measurement accuracy of ≤ 0.3 ℃ which makes this ideal for fever screening programmes. It also comes with a range of temperature measurement tools which includes Motion detection, Disk alarm, I/O alarm, Temperature alarm and many more. The CK350-F allows non-invasive fever screening to take place meaning there is no major distruptions to the flow of people in an area.

The system consists of three elements: An IR camera combined to a video camera in one housing, an on-line temperature standard source (Black body) used to calibrate the camera, and computer software for information processing. The CK350-F system can detect up to 16 objects with elevated temperature per second. The image obtained from the cameras is recorded for later analysis. It is possible to expand the system with additional cameras.

The system allows real-time detection of people with elevated temperatures.

Optotherm’s fever screening technology provides the most accurate method of mass screening for elevated facial skin temperatures that may indicate a fever. Because it is both fast and noninvasive, Thermoscreen is the best way to safeguard areas with high pedestrian flow.

Thermoscreen was originally developed in response to the need to screen large numbers of individuals for potential fever during the SARS outbreak in 2003. Thermoscreen scans subjects without contact from a distance, providing a discreet and safe method of detecting potentially feverish individuals.

Over 1,000 individuals can be screened per hour so as not to restrict pedestrian flow. Thermoscreen is sold as a complete, fully tested system including a computer with preinstalled hardware and software.

A primary symptom of many infectious diseases is fever. This has lead to monitoring the temperature of pedestrians in hospitals, airports, corporate building companies, schools, and other public areas. Thermoscreen provides a non-invasive, non-contact method of screening large groups of people for elevated facial skin temperature quickly and easily. Potentially febrile individuals can be detected with minimal inconvenience and disruption to pedestrian flow.

Thermoscreen is best utilized as the first of a two-point fever detection process. At the entrance to crowded areas, Thermoscreen is used to detect individuals whose facial skin temperature is higher than normal. Fever is then confirmed using a medical thermometer. This two-point system enables large groups of people to be screened quickly and accurately to effectively prevent febrile individuals from entering areas where contagious diseases can spread easily.

A Thermoscreen system is placed at the entrance of a hospital to screen patients and visitors upon entering the building (see figure). When operating in Automated Screening Mode that requires each individual to stop briefly to be screened, a single Thermoscreen station can effectively screen up to 1,200 subjects per hour. 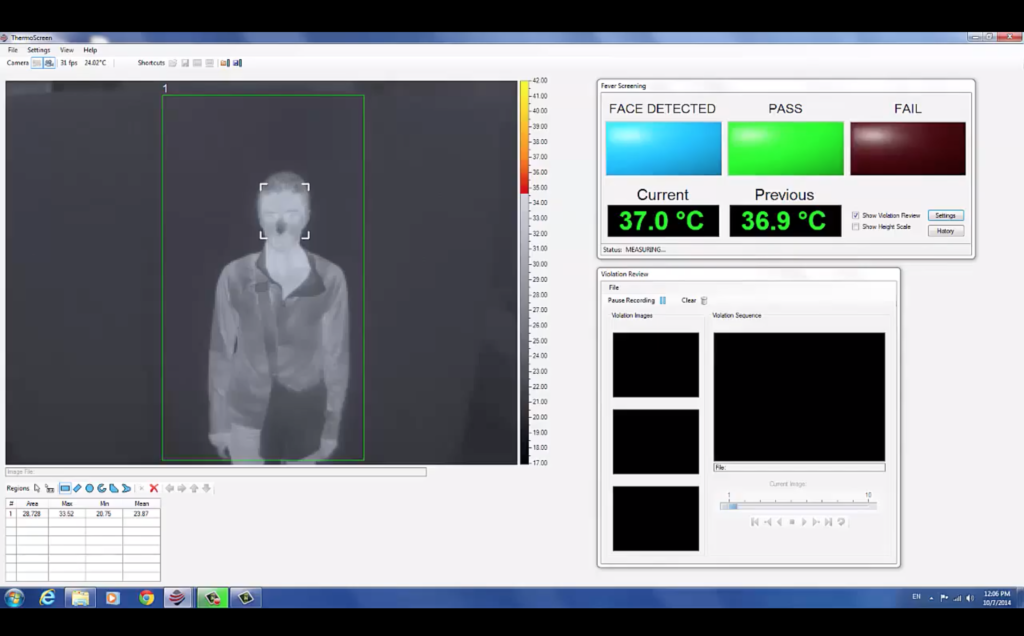 Each subject is screened individually. Subjects are notified to “remove eyeglasses” (contact lenses do not need to be removed) and to “stand still and look at the camera.” Subjects can be notified verbally by the operator or by using signs positioned along the line.

The Thermoscreen System detects each subject’s face as they enter the screening zone and issues a verbal command through the computer speakers to “please stand still and look directly at the camera.” After verifying that the subject is standing still and facing the camera, the screening measurement is automatically conducted and the screening result is displayed. In the case of a fever threshold violation, the audible command to “please wait here for an attendant” is issued. If screening result = Pass, “thank you, you may proceed” is issued.

Operator 1 operates the Thermoscreen system, examines the Thermal and Visual Images of subjects, and confirms Fever threshold violations. Operator 2 directs subjects into and out of the screening zone and also directs subjects whose facial skin temperature exceeds the skin threshold to the nurse station for further evaluation. If subjects are queued in line properly, screening each subject requires approximately three seconds.

Note: When screening throughput is low, a single operator can perform the tasks of both operator 1 and 2.

KARO Karlicki Sp. z o.o. company offers its assistance at every stage of the implementation of Thermal Imaging System, starting from the initial analysis of the situation, through the creation of concepts, the design stage, the equipment completion, installation and commissioning, as well as maintenance service. We make cost estimates for the needs of budget calculations.

We invite you to cooperation.